Home › Blog › Everything You Need To Know About Bee Stings

Everything You Need To Know About Bee Stings 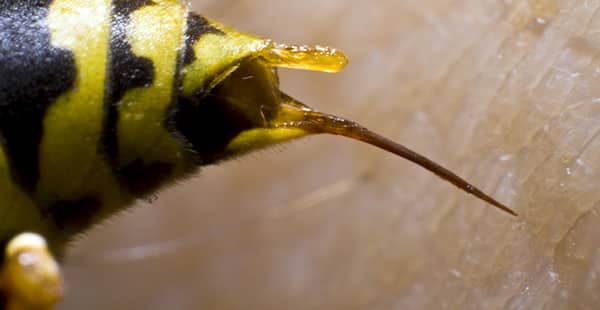 Bees are marvelous and complex creatures, of which volumes of fascinating information could be shared. But my guess is that you chose to read this article because you've either been stung by a bee or want to know what to do if a bee stings you. Well, you're in the right place. Here are some interesting facts about bees--as they relate directly to how they sting.

Have you ever seen a picture of someone covered in honey bees? Do a search for honey bee beards and be amazed. There are actually people in this world who think it is fun to have 10,000 crawling bees all over them. This might not be your cup of tea, but it is a great visual to display how docile bees can be.

Now, if you are aware that male drones do not have stings and don't sting, you may think the key to a honey bee beard is to have only drones. But you would be wrong. The female workers--the ones with the stingers--can be just as safe as a male drone if they are well fed. So, those crazy people with the bee beards spray the bees with a sugar spray several times before applying them to their face.

Hunger makes anyone irritated, but bees usually attack for another reason: defense of the hive. If you try to swipe some honey from an active hive like three men recently did in Pasco County Florida, you could walk away with 50 or more painful stings. Those female workers do not take kindly to you partaking of their hard-earned honey. Bees also don't take kindly to people who wave their arms around in the air and are also motivated to sting if they smell the pheromone scent left by other bees that have stung to protect the hive. This will increase swarming behavior.

Bees don't want to sting you, but they will.

When a female worker stings, the body parts in her tail are violently ripped from her. This trauma results in death. But when her instinct to protect the hive is activated, she doesn't think about this. All bee species aren't created equal, however. A carpenter bee may need quite a bit to get her instincts to kick it, but an Africanized honey bee is easily provoked and will chase you quite a distance before her blood lust wears off.

What do I do if I get stung?

When a bee stings she will leave her stinger with venom sac attached. The stinger is barbed and can't be removed easily, but you can get the sack off. If you remove the sack in less than 70 seconds, you may avoid getting a full dose of venom.

Areas that are stung will swell, so remove any jewelry near the sting. A cold pack will also help to reduce swelling.

Some people are highly allergic to bee stings. If you experience vomiting, headache and extreme swelling, call 911 immediately.

Bees stings on your property can be avoided with the help of a pest control company. They locate and remove bee hives before they can be a threat to your family or your pets.

So, there you have it, everything you need to know about bee stings, with a few fun facts thrown in. Have a fun spring and stay away from those hives.