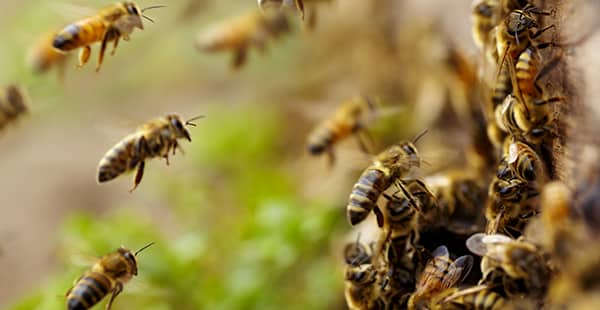 In Utah, on Friday March 20th, shortly after 11 a.m. the St. George Fire Department was dispatched to Elk's Field to respond to a reported case of bees. When they arrived on the scene, it was chaos. Kids were running. Mom's were panicking. And people were screaming and waving their hands. Several had to be treated for multiple bee stings, like an 84-year-old man who was stung 400 times! One woman spoke of how she felt helpless to assist her relatives. She said, "A group of us went over to try and help them bat them off and as soon as we got close we were just attacked ourselves." It was, she said, "A very very frightening but creepy incident." So, what can we learn from this story?  Quite a bit actually. Read on.

Not all bees are created equal. Most honey bees are docile, even when you get in close to their hive. As long as you don't wave your hands and threaten them, you are not likely to get stung. The bees that swarmed hundreds of spectators at Elk's Field were Africanized honey bees. These are aggressive bees that pour out of nests by the thousands and give chase to anything that appears to threaten their home. In this incident, many people got 10 to 60 stings when the bees attacked.

What should you do when attacked by honey bees?

The sad part of this story is that it could have been avoided. If a year-round pest control plan had been in place, experienced technicians would have caught the developing hive before it was large enough to do harm to anyone. No business or government municipality should ever be without routine pest inspections and year-round pest control.

How To Keep Wasps Away From Your Washington D.C. Yard

Some pests are so harmless that you almost feel bad for getting rid of them. Wasps, on the other hand, only cause relief when they’re gone. S...