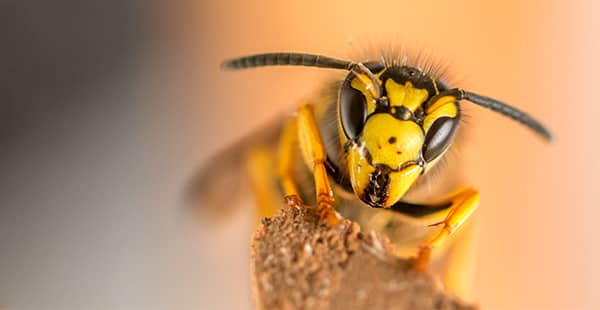 At the end of the summer to early fall, most of us are trying to soak up just as much of the nice weather as we can before winter sends us indoors for cozy fires and hot chocolate. We try to squeeze in some late season gardening, picnics, and barbecues. We don’t tend to put a lot of thought into the pests that may come along and ruin our fun at this time of the year. However, this is also the time of year when the infamous yellow jacket begins to turn rogue, and the result can be several nasty stings if you are not careful.

The yellow jacket is often confused with a bee due to their similar size and coloring. In fact, many “bee stings” are actually from yellow jackets, a type of wasp. The yellow jacket lives in colonies underground and in the spring and early summer feed mainly on insects to provide protein to the developing larvae that are back in the nest with their queen.

As the weather starts to cool and the larvae have matured, a few things begin to happen. Anywhere from 1,000 to 4,000 of maturing yellow jackets now occupy the nest. The yellow jacket colony workers will have built a larger reproductive cell where new queens have developed along with their reproductive male counterparts. In the chaos of all of these changes and overcrowding, you will begin to see yellow jackets on the move. These wasps will be more aggressive than they were all summer and quite likely to sting if provoked in any way.

Their tastes also change from high protein diets to something a bit sweeter. As their food sources becomes harder to find, they will scavenge; and that is when you will see them starting to show up unannounced at your gatherings and around your home. You will find them hovering around garbage cans, and food at an outdoor party and open soda cans are particularly tasty. These stinging menaces are easily provoked by this time of the year. Getting stung is not only painful; but if you have an allergy, they can be life-threatening. Yellow jackets can sting multiple times and the chemical trace they leave behind marks you as an enemy to other lurking yellow jackets causing them to attack. Multiple stings of this nature can be dangerous as well, even without an allergy. In both cases, you should seek medical attention.

Yellow jacket nests built near dwellings can be a distinct problem, especially this time of year as they range further from their nest in search of food. Always call in a professional to deal with the problem. American Pest can help you identify the nest, and safely eliminate the threat.