The following is a true story. Only the names have been changed to protect the innocent.

It was a normal day for Tom. He was on his second cup of coffee and firmly planted in front of the computer in his home office ready to tackle his online workload for the day when a tiny black speck danced in the air in front of him. It would have probably gone undetected, had it not been for the bright illumination of the 52-inch television he used for a computer monitor. The speck started on the right and wiggled through the air until it was no longer visible against the shadowed wall to his left. He shrugged it off and continued his work.

A few minutes later, it came down from above, moved erratically through the air in front of him and landed on the screen. But it didn't perch in one location. It ran up the screen in a very un-fly-like manner, capturing his complete attention.

He leaned in to look at it, sitting there on his screen, taunting him. Did it know that he could not simply swat it and be done with it? Did it know that his screen was a delicate surface? He waved his hand at it and attempted to swat it as it took to the air in front of the bright screen then disappeared off the edge.

Stupid fruit fly. He thought to himself, as he sat down to continue his work.

A few minutes later, his unwanted guest appeared again. He clapped at the air in front of him but the tiny insect zipped away to freedom, once again leaving the area in front of the brightly lit monitor.

This drove Tom to his feet. He danced back and forth to try to get the little fly between him and the monitor again but it eventually disappeared completely into the shadows of his office.

With a grumble, Tom left his office and went to retrieve another cup of coffee. As he stood in the kitchen, pouring more liquid energy into his coffee mug, a tiny fly zipped past his face. Was it the fly from his room? Had it followed him out to continue its efforts to torment him? It was doubtful. This was probably another one.

Tom went back to his office and plopped back down in his chair, only this time he had no intention of working. These little black flies had to go.

His fingers clicked the keys of his keyboard and the search results for "little black flies" appeared on the screen. According to the internet, these little flies were not fruit flies. They were gnats. And not just any gnat, they were fungus gnats. He was pretty sure of this because the pictures of fruit flies looked more reddish than black. And fungus flies were apparently known for running across surfaces at quick speeds.

After a few minutes of research, he came to the conclusion that he could rid his home of these fungus flies with apple cider vinegar. All he had to do was pour some vinegar in shallow bowls and leave them for the fungus flies to drink. The self-help blogger site explained that fungus flies are drawn to apple cider vinegar, but when they go to drink it, they break the surface tension of the liquid and drown in it.

Tom set up several bowls and soon found many fungus flies in the liquid. Everything was going according to plan.

The next day, there were still fungus flies flying around in the air. The traps were working, but not fast enough. But where were the flies coming from?

He did a search of his home and determined that the infestation had started in his daughter's room. She was away with her mom and her room had several flies in it.

After addressing the infestation in his daughter's room, he began squishing the flies on the walls in both bathrooms. He discovered that fungus flies are pretty easy to squish once they've landed on a surface.

The next day, the infestation had noticeably increased. Tom had gone from swaying and squishing flies to sucking them up with a vacuum cleaner.

He also started to see tiny, orange, sticky spots on the white door frames in his home. The fungus flies were using the apple cider vinegar to breed!!

Tom poured out all of the vinegar and took a soapy cloth and cleaned all of the door frames and vacuumed all the flies in both bathrooms, in his office, and throughout his home.

The next day, he still had fungus flies everywhere.

Even though this really happened, there is a moral to this story. If Tom had called a pest control company instead of going to the internet for pest control advice, he could have saved himself the nightmare of a fungus gnat invasion.

If you're seeing fungus gnats in your home and you live in Maryland, D.C., or Northern Virginia, reach out to American Pest for a quick resolution to your problem. Our educated and experienced pest control technicians are looking forward to assisting you. 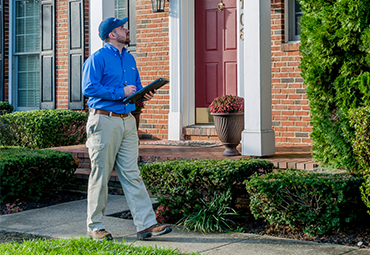 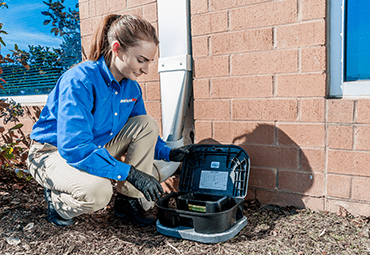 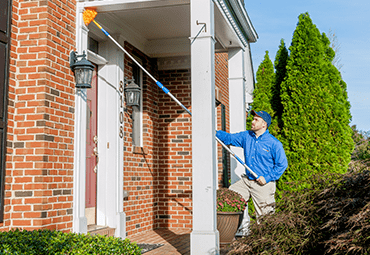 Our Preferred Care Plan is an affordable pest control solution for eliminating common insects that enter the home from the outside. You will receive an initial interior and exterior inspection and treatment for your target pest problems, along with those we uncover during our inspection. Exterior treatments continue once every quarter to control ants, mice and rats, spiders and 30+ home invading pests. Guaranteed service quality backed by our Pest Free Pledge.

If you’ve ever had ants get into your house, you know how annoying it can be. There’s no such thing as seeing just one ant in your hous...

Your Helpful Guide To Termite Swarmers In Washington D.C.

Your Helpful Guide To Termite Swarmers In Washington D.C.

If you live in the Washington D.C. area, especially if you’re a homeowner, a conversation about termite prevention and protection should have...