Home › Blog › Cicada Killer Wasps Sound Bad, But Are They?

Cicada Killer Wasps Sound Bad, But Are They? 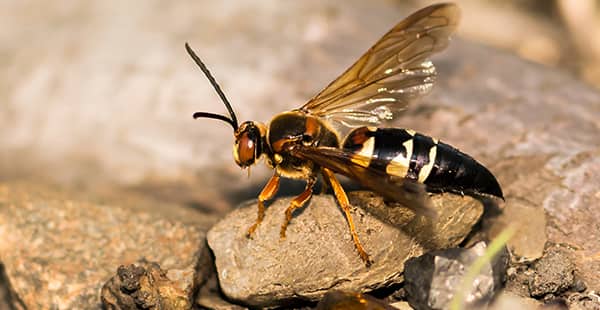 Most people have heard of honey bees, yellow jackets and hornets but what about cicada killer wasps? They are probably one type of stinging insect that you may not be familiar with. Their name alone may make you think that they are aggressive and dangerous and should star in a horror film but in reality they are not all that bad.

First thing first, what exactly is a cicada killer wasp? Well, a cicada killer wasp is actually the largest species of wasp that is found in the United States. They can grow up to 2 inches in length. The males are generally two times smaller than the females and do not have a stinger. Adult bodies are black to reddish brown in color with yellow strips. Their legs are orange in color and their wings are a brownish color. Cicada killer wasps do not live in large colonies and are considered to be solitary insects; instead of nests they create underground burrows to live in.

Cicada Killer wasps create their foot deep burrows in lawns, sandy areas, and under the edges of concrete slabs. Each burrow has many different individual “cells” that the female uses to lay her eggs inside of. After the burrow is built and her eggs are laid, the females will provide her young with food. She will hunt for cicada and other insects. She will sting and paralyze the insect, bring it back to the burrow and stuff it into a cell.

Once the individual cells have a food source inside she will seal the cells up. The eggs inside will hatch in 1-3 days and the larvae will then feed upon the insect that mom provided. After feeding on the insect for about 1-2 weeks, they will create a silk cocoon around themselves and spend the winter inside of it. In the late spring, early summer the new adults will emerge and the cycle will begin again.

As their name suggests, cicada killer wasps are definitely dangerous to cicada and other insects, but are they dangerous to people? Male cicada killer wasps do not have a stinger. Females do have a stinger but are pretty laid back for a stinging insect and will rarely, if ever, use it. If stung, the sting from these wasps is much less painful than that of other singing insects but the venom can still cause a severe allergic reaction in some people that requires immediate medical attention. So while these wasps are not super aggressive care still needs to be taken around them. Additionally, if burrows are built near your home they should be removed.

If you are seeing these large stinging insects buzzing around your property contacting a professional pest control expert is the most effective way to eliminate them. A professional will have the skill and knowledge to find all the burrows and eliminate all the adults and offspring from your property as quickly and safely as possible!

Contact the NOVA pest control professionals at American Pest today for help identifying, inspecting for, and getting rid of cicada wasp killers and other pest insects from your Northern Virginia home and property!