Home › Blog › Take The Sting Out Of Summer

Take The Sting Out Of Summer 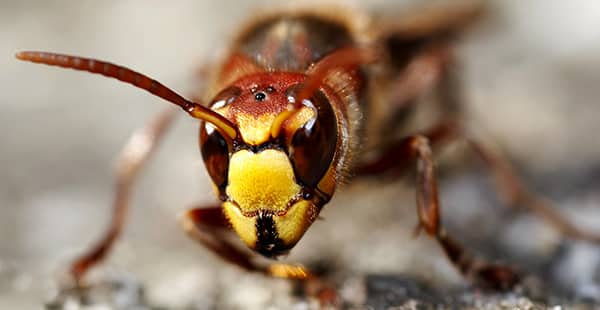 Pests come in all shapes, sizes, levels of risk, and dangers. Some pests are very difficult to eradicate while others are almost impossible to locate; and then there are stinging insects. Wasps, hornets, and bees have the unique ability to strike fear into the hearts of people with their erratic flying and buzzing around to the extent that most individuals want nothing to do with them.

No one wants an active wasp nest on their property. Any attempt to remove the wasp nest is difficult, at best, because the occupants of the nest, in their effort to protect the colony, will do everything they can to sting multiple times. Many stinging insects such as various wasps, hornets, and yellow jackets are social insects living in large colonies. These nests, among other places, can be found in the ground, in trees, inside voids in the walls, under eaves, and in attics.

Removing these nests is not as easy as one may think. Consider climbing a ladder to remove a nest and suddenly being bombarded with hundreds of wasps. How about trying to spray a nest in the ground and suddenly having many wasps boiling up in your face? Think of trying to remove a nest out of the attic only to have a multitude of angry wasps attacking, and you have nowhere to retreat.

At best, removing a wasp nest is something that only a very nimble and agile individual should ever attempt. This should never be attempted by anyone who has any level of allergies to these creatures. An allergic reaction to insect stings can be very dangerous. While there are those who want to try the “do it yourself” method of removal, wasp nests should only be removed by trained professionals.

Not only is it dangerous to remove a wasp’s nest, it is also very difficult to achieve total eradication. The best choice is to seek the services of a professional pest control company. At American Pest, we have the distinct status of being one of the oldest family-owned pest control companies in the Washington DC area. We have more than 100 highly trained pest control technicians eager to assist you with all your pest control needs.

Our Preferred Care packages will provide the best treatment for more than 30 common household pests. Contact American Pest today and let us remove your stinging insect nests while protecting your home and family throughout the year.